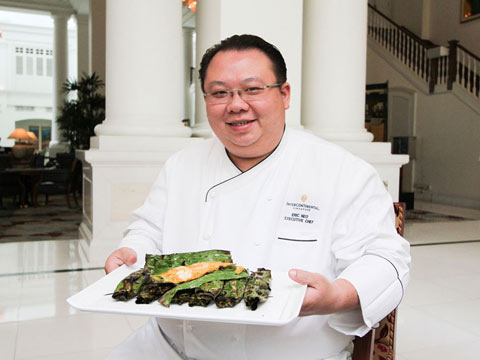 Having started out as a chef at the age of 16, Chef Eric brings with him close to 20 years of culinary and catering experience across varied cuisines including Cantonese, Western, Peranakan, Asian, as well as local delights.  He rose to become Head Chef of international buffet restaurant Aquamarine in Marina Mandarin Singapore before being promoted to the hotel’s Executive Sous Chef in 2006. He joined Crowne Plaza Changi Airport as Executive Chef in 2008, where he was an integral part of the pre-opening team responsible for developing menus and implementing operational procedures for the hotel’s food and beverage outlets. He was appointed InterContinental Singapore’s Executive Chef in October 2011.

His expertise and culinary skills as both chef and leader have earned him extensive recognition. Among other accolades, he was the team manager of the culinary team representing Singapore at the Pattaya City Culinary Challenge 2011, leading the team to win the gold medal as well as Dubai World Culinary Championship 2013 – Champion. He was also one of two elected Singapore representatives for the Tiger Brands World Cooks Tour for Hunger in Johannesburg, Cape Town, and Durban, South Africa in 2003, at which he received a commendation for outstanding service. He also appears regularly as a guest chef or judge on popular local television food programmes such as “Koji Cooks” and “Wok Stars” on MediaCorp Channel 5 and “Neighbourhood Chef” on Channel 8.

Currently he serves as the Vice President of the prestigious Singapore Chefs Association, sits on the Culinary Committee of Chaine Des Rotisseurs Singapore, and is the F&B Sector Ambassador for the Singapore Workforce Development Agency.

The global trend today is revolving around recipes, food and cuisines. And, how you inspire your cuisine into global markets. You need to be creative in your menu planning, setups and make sure people are attracted to your food. Today, there is lots of innovation disrupting the food business, but the attraction that is attracting people to try will grow the sector.

Contributing to the growth of cuisine

I am a Singaporean, based out of Singapore.  I travel around the world and learn different food techniques. I am trying to make Singapore cuisine a modern Singapore cuisine. Traditionally, there are some dishes which we could change in terms of plating, representing, and ingredient. We are on a journey to make it a different dish. Chefs are global connect and are very creative. They are always after developing new things, techniques and ingredients.

Make sure you really know your foundation well, knowledge of the ingredients and flavours. Travel, learn and relearn are some important factors that help chefs grow gradually.

I live in Singapore and there are many Indians. I have Indian chefs, so I get Indian foods daily. I like the spices used in Indian cuisine and the magic of different spices used together but the dish still tastes very good. I like the strong and robust flavour.

The Anti-Caf Where Time is Money
4Min Read
Nusra
Share